This recipe is a skinnier version of Nobu’s famous fried rock shrimp appetizer that’s typically fried and doused in a creamy spicy mayo-based sauce. Our version is baked and uses Greek yogurt, sriracha and sesame oil to create a healthier, yet still drool-worthy copycat!

Nobu is the kind of restaurant that just doesn’t get old.

No matter how many times we go — or what city we treat ourselves in — they always, always get the food right. Their dishes are classic and the Rock Shrimp Tempura with Creamy Spicy Sauce is no exception!

This dish is an absolute *must order* on our list whenever we get the opportunity to eat at a Nobu concept — the extra crispy but light tempura battered rock shrimp (that are bite sized and innately adorable) is tossed in a creamy, spicy sauce and served hot. The shrimp basically melts in your mouth!

My take on this famous dish is healthier because we’ll bake the shrimp (instead of deep frying in oil) and the creamy sauce is Greek yogurt-based instead of mayonnaise, making it naturally lower in calories and higher in protein. That’s not to say that we’re scrimping on flavor though!

I used frozen rock shrimp that I found pre-coated in a low calorie, gluten-free batter from Whole Foods – linking here! If you can’t find near you, I’ve included a simple tempura coating that I found on Nobu’s website in the recipe below.

In addition to the coating, each quarter-sized rock shrimp is then seasoned with paprika, kosher salt and pepper adding a ton of savoriness to each bite. The golden, baked shrimp are then finished off with a tossing of our skinny creamy sauce — you’ll think you’re sitting next to the Kardashians at Nobu Malibu in no time.

I served our rock shrimp with my 5 Minute Cauliflower Fried Rice and some mixed greens for dinner, but this would obviously make for a delicious appetizer served on its own. I hope you enjoy!

Thank you for being an amazing reader of The Savvy Spoon! If you make this recipe and love it, I would so appreciate you rating it below and/or leaving a comment! Be sure to follow me on Instagram and Facebook for more recipes and healthy lifestyle content! 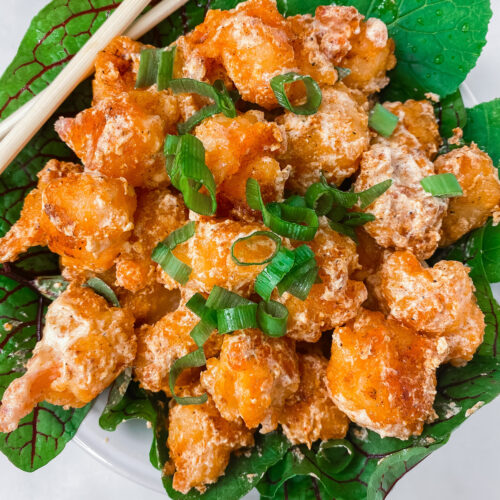 Keyword appetizer, asian, crispy, rock, shrimp, skinny
Tried this recipe?Share with others how it was!
appetizerasiancrispynoburockshrimpskinnytempura

I’m so glad you’ve found my little hub of healthy comfort food in the big ole internet. I’ve been sharing recipes since 2010 and I love the happy wellness community we’ve created here!